What Are Tanning Beds? 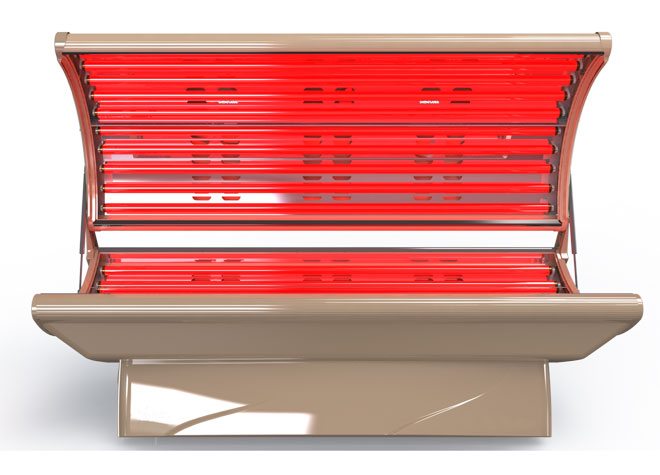 Tanning beds are used by both men and women to tan the skin on your body without actual sunlight. The process consists of laying horizontal in an enclosed bed with a bank of sunlamp tubes above and below the body. The bed uses ultraviolet radiation to produce a cosmetic tan. The effect of using fluorescent lamps with phosphor blends is similar to the sun’s rays. Tanning beds can be used at home or in a salon. At home tanning beds are typically small, containing 12 to 28 100 watt lamps. The beds used in salon are usually bigger and contain 24 to 60 lamps, ranging from 100 to 200 watts. The maximum exposure time in most tanning beds is 20 minutes.

Here’s a fun fact for you from the Huffington Post…

“Up until the 1920s, tan skin was a sign of poverty, and a creamy complexion was the epitome of beauty. If you’ve seen Baz Luhrmann’s The Great Gatsby or Vogue’s flapper-inspired photo shoot with Carrie Mulligan, you’ll get the picture. Powdery, pale skin that rarely saw the sun was a sign of glamour and luxury.
That is, until Coco Chanel came along. As the story goes, the fashion icon got a little too much sun on one of her yacht trips in the Cannes in 1923, returning to the spotlight with a bronze glow. Her sun-kissed look launched a fad and, eventually, an entire industry revolving around achieving the perfect tan.
Soon, celebrities and socialites were flocking to tropical destinations during the winter, using sunlamps to darken their once-porcelain skin. Sunburns were common. So was lying out in the sun for house to “work on your tan.” (HuffingtonPost.com)

By the early 1980s, tanning beds, along with spray tans, were starting to become popular. Younger people were primarily drawn to the allure of tanning bed. Making sure they were tan for school dances, being sure to be tan before going to the beach for the summer, and so on. The fad had a pretty long running and although there are still tanning salons and high schoolers still get a tan before prom, the downsides of the tanning world have certainly come to light in the past few years.

Yes, tanning beds will make your skin glow, you won’t have tan lines, and you’ll always look like you just hopped off your yacht, but are these things worth the risks? Overexposure to UV radiation is very much known to cause skin cancer, increasing the age process of your skin, including wrinkles, mutate DNA, and lower the immune system. Tanning beds can also drastically increase the chances of being diagnosed with Melanoma, the most serious form of skin cancer.

Teenagers are frequently victims of impeccable market skills and ploys. Salons attract teens with coupons, media outlets, discounts, magazine and newspapers ads, and free sessions. It’s obviously difficult for teenager’s to resist the urge, making them the biggest users of tanning beds. Tanorexia has become a major issue in the current world. Tanorexia describes the inability to stop the use of false tanning sessions and is seen in teenagers who frequent salons and admit being unable to stop the obsession.

The US Public Health Services states that “UV radiation, including the use of sun lamps and sun beds are known to be a human carcinogen.” It also explains that skin cancer is most commonly diagnosed in people under thirty years old once they have been exposed to the light. Children and teens have a biological vulnerability to UV radiation, thus making them more susceptible to skin cancer. Because of these horrific statistics, since 2005 many states have banned the use of tanning beds for anyone under the age of eighteen or required parental consent ahead of time.

While tanning beds are basically awful, promote low self esteem, increase the risk of cancer, and ruin our skin, who says we can’t be inspired by them?

Light therapy has been being used in the form of a bed, similar to the look of a tanning bed, for awhile now. The major difference here? The lights are red! No, you’re not entering a spaceship. And no, you’re not going to see the devil in there. Instead, you’re reversing the aging process of your skin, along with quite a few other benefits. Because tanning beds have been under scrutiny for awhile now, the industry is evolving. A lot of places have been changing the lights in their tanning beds and creating red light therapy devices. Companies that used to sell the beds are now selling devices that do the exact opposite of what their old products used to do. Isn’t that funny?

What Is The Red Light?

The red light process is more commonly used for cosmetic assistance. Such as reducing fine lines and wrinkles, putting a stop to acne, healing after sun damage, and other skin problems.  But beside being an anti-aging miracle worker, red light therapy has shown some pretty serious results when it comes to chronic and acute pain. NASA discovered the benefits of red light therapy in the early 2000s during a clinic for wound healing and pain management. Not coincidentally, this is when conventional medicine caught on and light therapy said goodbye to it’s taboo image. NASA is pretty good at stuff like that.

Since the discovery, red light therapy has been proven to provide relief from muscle and joint pains, high blood pressure, arthritis, as well as nerve and tissue damage. It can also decrease injury healing time, which is why pro athletes undergo the therapy after injuries.

Sunco Tanning offers a red light therapy bed named the Harmony 20. The bed uses 20 RVL (Red Visible Light) collagen lamps and 2000 watts. The bed can be used daily and only 15 minutes for a full body session. The bed is also one of the green energy products made by the company. Which is not only good for your wallet, but also good for the environment. It plugs into a 120 volt house hold outlet and is made in the USA, which is never a bad thing.

It’s about time we do something good for ourselves, instead of killing our skin to make our reflection look better. Don’t you think?